Editor’s Note: September 10, is the World Suicide Prevention Day. Twitter and #MentalHealthPH organized a special #UsapTayo (Let’s Talk) session together with different organizations and government agencies in Asia to increase awareness on suicide and suicide prevention, and to remind everybody that there are alternative to suicide and that suicide can be prevented through different means. 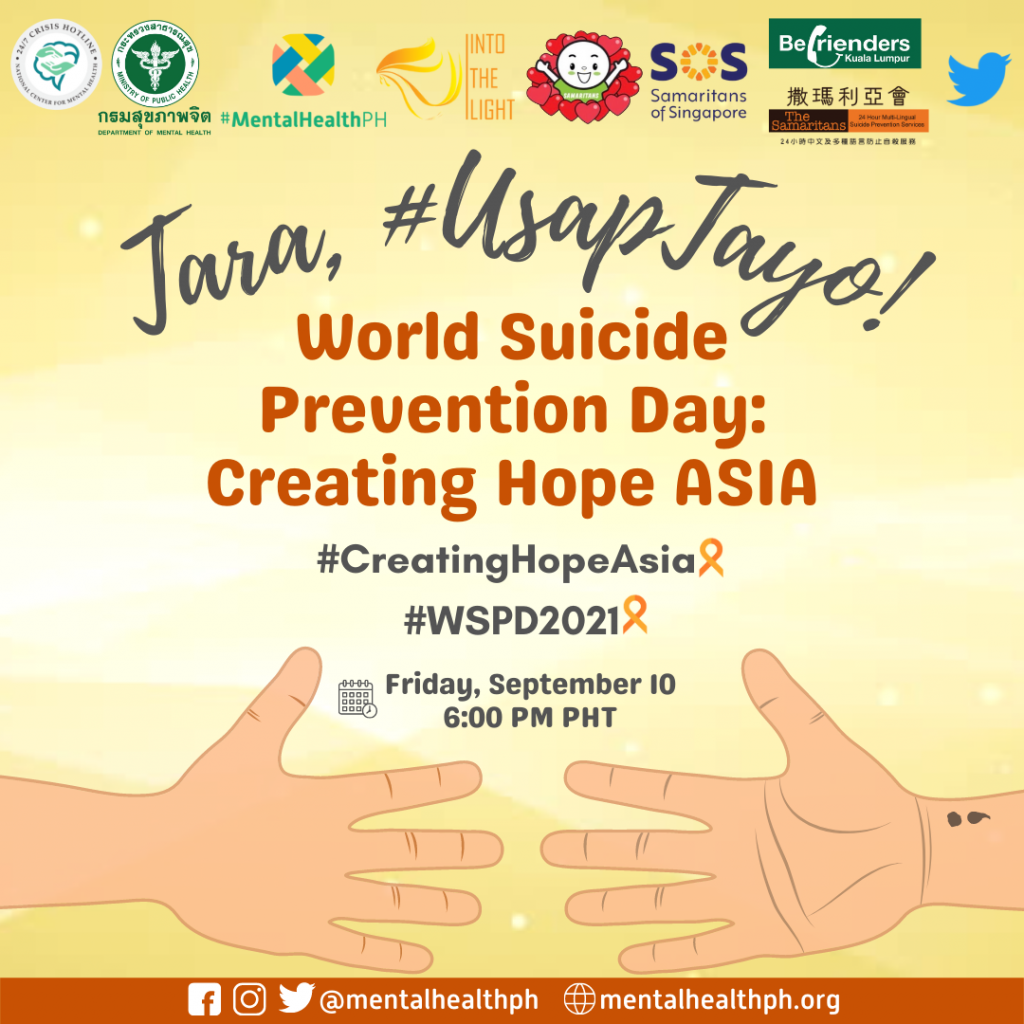 Mental health advocacy has always been the heart and soul of #MentalHealthPH. Since 2016, the organization has increased awareness about people’s struggles with mental ill-health, empowered members to support themselves and others, and collaborated with various sectors towards sustainable solutions.

One of its social media campaigns, #UsapTayo, seeks to educate and zero the suicide cases and stigma against mental health. The teams involved in the different campaigns also continuously go back to their why’s to improve the organization’s goals– to champion and build mentally healthier communities in the Philippines.

This September 10, on World Suicide Prevention Day (#WSPD2021), #MentalHealthPH’s collaborations continue to expand as the organization seeks to understand suicide and suicide prevention policies in Asia. By amplifying collective voices from different institutions, everybody is reminded that we all can be a source of light.

So you keep pushing, and a lot of times you feel like you’re pushing against this thing that just never moves, but you keep on doing it, you run around it, you shout, you make noises, and then you push again, and eventually it gets up, it shakes itself off and, lo and behold, it starts moving.[1]

Much like the many essential health advocacies (elephants) that take years to push forward, mental health, despite being acknowledged as playing a necessary role in achieving global development goals, lacks the ample pushing it still needs. Advocacy on mental health has come a long way.

But is it enough?

People with mental disorders experience severe human rights violations, discrimination, and stigma. Depression is considered one of the leading causes of disability. Suicide remains the second leading cause of death among teenagers and young adults [4].

Be the Light: Suicide Prevention Strategies

Suicide is a serious public health problem [5]. According to the 2021 World Health Organization (WHO) fact sheet on suicide, more than 700,000 people die from suicide every year. Suicide is considered the fourth leading cause of death among teenagers and young adults. Every suicide affects families and communities, with long-lasting effects on people left behind [5].

Contrary to popular belief, suicide is not exclusive to high-income countries. Seventy-seven percent (77%) of global suicides occur in low-and middle-income countries. Ingestion of pesticides, hanging, and firearms are among the most common methods of suicide globally [5].

Suicide attempts happen impulsively in moments of crisis; dealing with life stresses, financial problems, relationship break-up, chronic pain, and illness may be reasons for suicide attempts [5]. Post-traumatic issues such as disaster, violence, abuse, and a sense of isolation may also contribute to suicidal behavior. Further, minority groups who experience discrimination–such as refugees, migrants, indigenous peoples, the LGBTQIA+ community, and incarcerated individuals–are vulnerable to suicide attempts [5]. However, the most potent risk factor for suicide is a previous suicide attempt [5]. These individuals need to be protected. They need a light to guide them through.

Stigma surrounding mental disorders and suicide has become a barrier for individuals to seek help. Lack of awareness about suicide as a significant public health problem and the taboo associated with suicide has prevented individuals from openly discussing it. Suicide prevention is not a priority among countries; only 38 countries established a national suicide prevention strategy [5].

Suicide prevention starts with community awareness and breaking the stigma against suicide. For every successful suicide, there are many more people who attempt suicide. A prior suicide attempt is the most critical risk factor for suicide in the general population [5]. However, suicides are preventable with evidence-based, timely, and low-cost interventions. A multisectoral suicide prevention strategy is needed for national responses to be effective [5].

Measures including LIVE LIFE, WHO’s approach in suicide prevention recommends effective evidence-based interventions. Limiting access to the means of suicide can significantly decrease suicide attempts at the individual level. Fostering socio-economic life skills among adolescents, and interacting with media for responsible suicide reporting helps suicide prevention at the community level. Identification, assessment, management, and follow-up of anyone who is affected by suicidal behaviors are adopted by mental health practitioners to prevent suicide [5].

These evidence-based but straightforward interventions can help prevent suicide. However, factors such as situational analysis, multisectoral collaboration, awareness-raising, capacity building, financing, surveillance, monitoring and evaluation at the systems level must be vigorously implemented by various government and non-government organizations [5].

Suicide prevention requires coordination and collaboration among different sectors of society, including organizations working in health, education, labor, business, justice, law, politics, and in media. Comprehensive and integrated systems approaches are needed to impact complex issues such as stigma and suicide [5].

September 10 is World Suicide Prevention Day #WSPD2021, and the International Association for Suicide Prevention invites us to Create Hope Through Action [2]: by encouraging understanding, reaching in, and sharing experiences, we want to give people the confidence to take action. To prevent suicide requires us to become a beacon of light to those in pain. You can be the light.

This #WSPD2021, #UsapTayo’s theme is “Creating Hope ASIA.” This session aims to understand suicide and suicide prevention policies in Asia. It seeks to amplify collective voices from different institutions to remind everybody that we all can be a source of light and that suicide can be prevented through various means. The event recognizes the individual actions and contributions of individuals working in suicide prevention.

A particular focus for both the tweet chat and spaces sessions on this day is on suicide prevention, the advocacy around which #MentalHealthPH was created.

This event will happen on Twitter Spaces, a live audio conversation launched by the social media platform. Twitter has always been supportive of mental health advocacies. In 2019, Twitter launched the #ThereIsHelp notification with Samaritans of Thailand and #MentalHealthPH. It is a notification service that provides mental health resources to vulnerable individuals who need help [6]. Joining the conversation will be the following organizations and their representatives:

The NCMH Crisis Hotline Suicide Prevention Strategy embodies the LIVE LIFE approach of the WHO, which aims to provide a comprehensive package of suicide prevention interventions. Early Identification is a core intervention in preventing suicide. The 24/7 Crisis Hotline meets this objective of providing rapid crisis identification, assessment, and management of distressed Filipinos who are at risk of committing suicide.

Since its creation in May 2019, it has received more than 7,000 calls (as of June 2020) from different parts of the country and abroad and has attended to the various concerns of individuals in the community. It provides much-needed help for those at risk of committing suicide and serves as a portal to other agencies and mental health professionals. It continuously collaborates and creates linkages with other government agencies and professional organizations to improve the referral of callers to mental health professionals in the country. 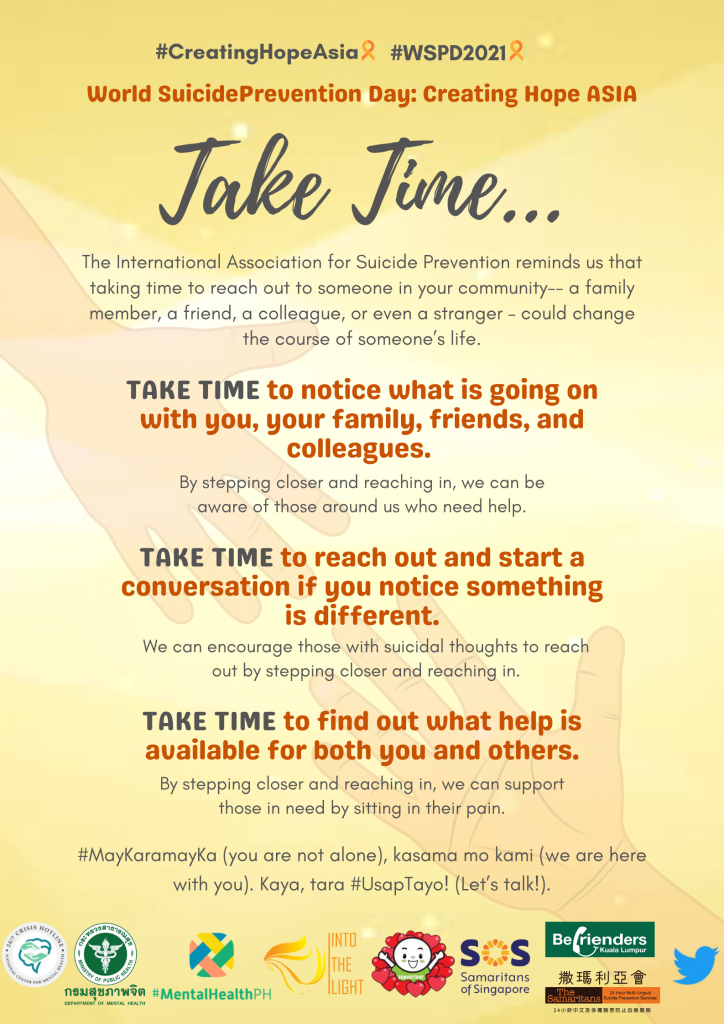 As we navigate through these difficult times, let us remember to pause and TAKE TIME.

The International Association for Suicide Prevention reminds us that taking time to reach out to someone in your community– a family member, a friend, a colleague, or even a stranger – could change the course of someone’s life [3].

TAKE TIME to notice what is going on with you, your family, friends, and colleagues. By stepping closer and reaching in, we can be aware of those around us who need help [3].

TAKE TIME to reach out and start a conversation if you notice something is different. We can encourage those with suicidal thoughts to reach out [3] by stepping closer and reaching in.

TAKE TIME to find out what help is available for both you and others. By stepping closer and reaching in, we can support those in need by sitting in their pain [3].

As we say in our tweetchats and twitter spaces—-Always remember, #MayKaramayKa (you are not alone), kasama mo kami (we are here with you). Kaya, tara #UsapTayo! (Let’s talk!).

See you every 10th, 20th, and 30th of every month, and together let’s ZERO the suicide cases and stigma against mental health! 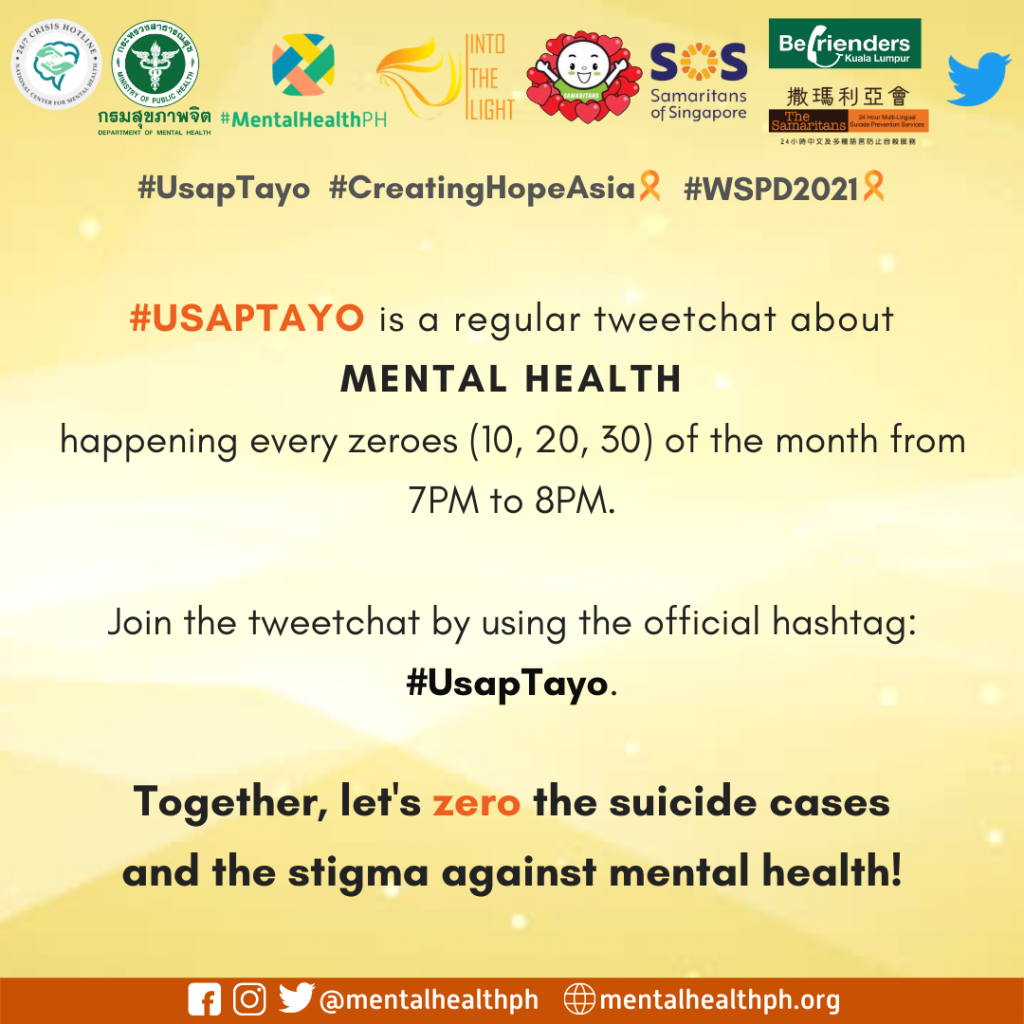 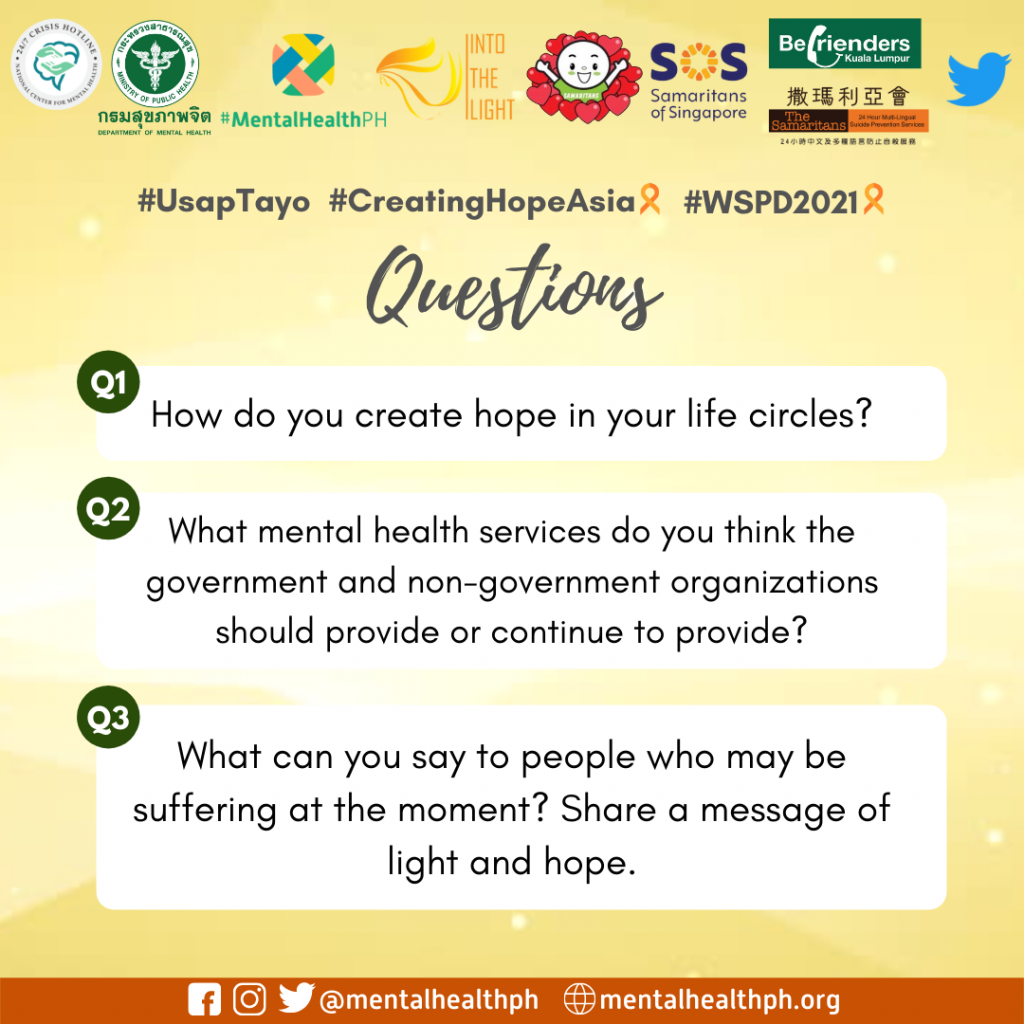 [6] Ampolpittayanant, M. (2019). Working together to prevent self-harm and suicide. Retrieved from: https://blog.twitter.com/en_sea/topics/company/2019/Working-together-to-prevent-self-harm-and-suicide 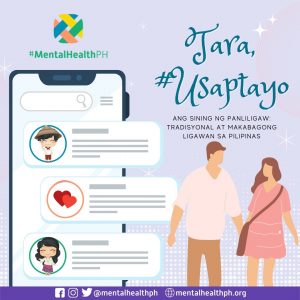 The Art of Making Ligaw: Traditional and Modern Courtship in the Philippines 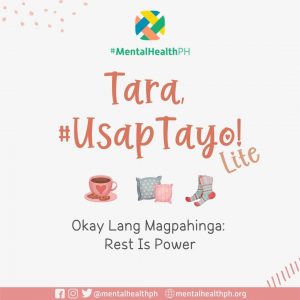 Rest as a concept can be defined in several ways. In an interesting analysis paper published in the Journal of 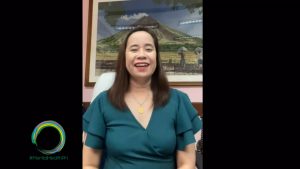 Just in case you need to hear this today: Dr. Carolina Rayco of Philippine Mental Health Association, Inc. reminding us that no 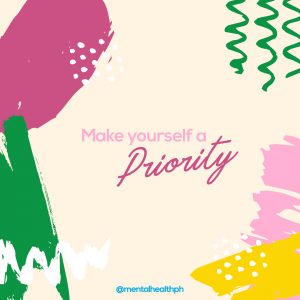 Self-Care Reminders: “What if you simply devoted this year to loving yourself more…?”

“What if you simply devoted this year to loving yourself more?” #MentalHealthPH #Selflove #RecoverTogether Art by Nicole Ivanka How do you